Why You Should Create an Organizational Chart for Your Production Team

At the two churches I’ve served on staff, I created an Org Chart for my teams for a few reasons. The main reason being they grew so large so fast that I needed a way to minister to a lot of people at once without killing myself. Obviously I couldn’t do it alone. So we created teams and asked key volunteers to lead those teams.
Here’s how it looked for us at Newspring: 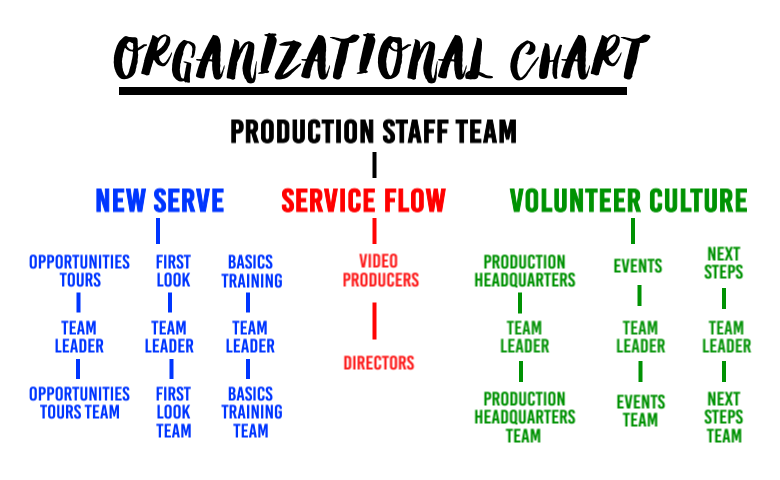 Here’s some explanation on each tier:

At the Columbia campus of Newspring, we had 5 full-time production staff members:
-Service Producer
-Video Coordinator
-Audio Coordinator
-Lighting Coordinator
-Worship Leader
This staff team split responsibilities for all the teams on our Organizational Chart.

This team was responsible for everything dealing with a Sunday. From prepping volunteers to coordinating the control room, to evaluating the service and making changes.
Video Producers: the Video Producer was in-charge of the volunteer team and the execution of a service on a Sunday. This person would be in the control room as an overseer of the service. They would be available to solve problems before they happened, put out fires if necessary and handle everything related to managing the video team. This person also contacted the Director each week and worked directly with the staff team to know the details of a Sunday and communicate those details to the team.
Directors: the Director reported to the Service Producer. This person was responsible for everything that went “live”- they called camera shots, called for graphics and video, broadcast feeds, and everything else that appeared on screens.

This team was responsible for our volunteer culture and atmosphere. This was also a great place for someone less technically minded to serve or someone who wanted to serve on our team but not run a piece of gear.
Production Headquarters Team: This team was responsible for making our production hangout space awesome. They coordinated food, provided games and activities, planned devotionals/testimonies/stories/guest speakers and decorated our space.
Events Team: Our Events Team planned outside activities for our production volunteers. The only requirements I had for this team was to have one small event every month (go to the movies, go bowling, go to a sports game) and one big event every quarter (Chili Cook-Off, Christmas Party, Cookout).
Next Steps Team: This team helped pastor our people. I wanted them to be really involved relationally with our volunteers. This team helped people take their next step on our team (with learning a new position, taking on a leadership role, etc.). They also helped people grow spiritually (provided devotional and Bible Study resources, helped them find a small group, helped connect them with counselors, etc.)
Each team involved in New Serve and Volunteer Culture had a Team Leader. We created the Org Chart first so we knew the needs of the team, then we prayed about who would be best to fill these roles.
So, why should you create an Organizational Chart for your team?
1. It keeps everyone organized and informed.
2. It lets volunteers know who to go to for direction.
3. It helps you, as the staff member, be a leader of leaders and empower your team to have ownership in their culture.
4. It lets you see clearly what the needs of your team are.

Do you have an organizational chart for your team?